Now the Lawyers Want to Do Diversity and Inclusion

About 130 years ago Friedrich Nietzsche imagined a world Beyond Good and Evil.  He railed against "the priests," starting with Zoroaster in what we now call the Axial Age. Nietzsche thought it was a very bad thing to repress our natural and healthy tribal hate for the other and instead turn the hate against ourselves, as in Original Sin.

Now, I have to say that I disagree with Fritzi on this, because I think that the idea of Original Sin and Divine Justice was pure genius, because it taught humans living in cities not to blame the other guy all the time and stick a knife in his ribs just to make sure, but to think that maybe the problem starts at home! For city life depends on getting along with strangers, giving the stranger the benefit of the doubt, giving him a chance to prove his good faith before deciding to stick him in the ribs.

Nietzsche prophesied the Overman, the creative chap that rose above good and evil and realized that the real meaning of life, the universe, and everything was to boldly go where no man has gone before, to coin a phrase.

But in fact in many ways the opposite has happened, as government force and religious doctrine have combined in various totalitarianisms to force a single truth about Good and Evil on all humans or else. And you had better not boldly go anywhere without checking with the local SJWs.

So it is clear that we have not got Beyond Good and Evil. Not yet.

Nietzsche prophesied the Death of God, and maybe he was right, but it seems, at the very least, that God has been replaced by a whole underworld of demons. I'm not convinced that the change has been beneficial.

Put it this way: the God of the Bible may have died because fashionable educated people that write books stopped believing in Him, but the need for religious belief has not died.

Don't believe me? Then what in the world do the #WeBelieve yardsigns that sprouted in every liberal front yard after the Trump win in 2016 mean? 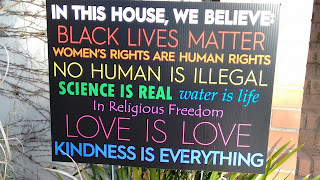 Now I have no problem with liberals believing anything they want. What I don't like is that today liberal secular religious dogma is enforced as a kind of orthodoxy of the State Church of the Educated Class, where you had better bang your head on the floor, as the Chinese used to do in front of the Son of Heaven, or else no job for you.

Put it this way. In the bad old days of "the priests," there was at least a nominal separation between the political sector and the moral/cultural sector. But in our modern world, where the enlightened and the educated fondly believe in an "ethical" community, the enlightened and the educated are stupid enough not to understand that they just mean by "ethics" that people like them will make the rules about good and evil, and you'd better not be caught on the wrong side or else.

So, a friend sent me a couple of links here and here about bar associations in the US and Canada instituting professional requirements for "diversity and inclusion," so that law firms would be required to hire lawyers in accordance with some sort of notion about race and gender representation.

Back in the good old Sixties when we passed the Civil Rights Acts, Sen. Barry Goldwater (R-AZ) got into hot water because he refused to vote in favor, on the grounds that the acts did not merely require government to stop discriminating, but private individuals too. As a libertarian, he believed that ordinary citizens have a right to discriminate. The problem was and is government that has and always will discriminate in favor of its supporters and against its opponents.

So if you are going to have a Civil Rights Act, it would be a good idea for it to state that government shall not discriminate on the basis of race or gender, period.

We can see that Barry was right, because the de-facto situation in the United States today is that government discriminates all over the place in favor of its racial, gender, and illegal alien clients in a blatant program of discrimination, whereas ordinary citizens are forbidden to discriminate on pain of administrative harassment by liberal-dominated Human Rights Commissions. And that is unjust.

The dirty little secret about discrimination is that most eevil businessmen will set aside their prejudices if the price is right. They may not like black homeboys, but if the homeboy works for less than a nice little teenage white girl, well... And who knows? If the homeboy puts his shoulder to the wheel and learns how to charm the customers the racist sexist homophobe of an employer might even hire one of the homeboy's buddies. By the way, businessmen also hesitate before hiring a minority because firing minorities can end up costing an arm and a leg if the minority decides to protest the firing by filing a complaint to the local civil rights commission. Just saying.

The only good thing is the historical record. It suggests that the kind of moral panic we are experiencing today is bound to be short lived. The various manias that flesh is heir to tend to exhaust themselves because humans cannot live forever at fever pitch. Eventually they instinctively return to wiving and thriving, which is their real life work.

And here is my idea on Good and Evil. The really bad stuff, like murder and mayhem, we punish with the criminal law. But lesser evils, like first trimester abortions, we deputize to priests and counselors selected by the sinners themselves, as in a church community. We do not give the priests of a conservative church the power to punish members of a liberal church. And we do not, as now, give the activists of the liberal Church of Progressive Wokeness the power to punish disreputable Deplorables.

Now that is what I call civilized.
Posted by Christopher Chantrill at 11:48 AM

Email ThisBlogThis!Share to TwitterShare to FacebookShare to Pinterest
Labels: nietzsche